Women in the Workplace

March is Women’s History Month, so this month’s Brave Conversations will focus on issues facing women today. Our last conversation this month discusses women in the workplace.

What issues do women face in the workplace? 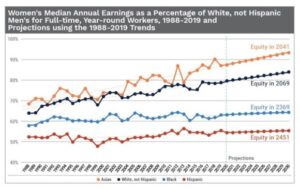 While there are many hurdles and difficulties for women at work—we discussed sexual harassment last week—three of the top work-related issues women navigate are equal pay for equal work, child rearing expectations and hurdles, and moving up the career ladder.

“According to the U.S. Department of Labor, women earn less than men on average in nearly 350 different occupations,” Aldon Thomas Stiles writes for California Black Media.

To create more awareness around pay inequity, Equal Pay Day was created in 1996 and symbolizes the average date until which women would have to work to earn the same amount men earned in the year prior. This date changes every year based on updated wage gap statistics, and this year, Equal Pay Day was Tuesday, March 15.

For more detailed graphs and demographic information including Native populations and the American Asian and Pacific Islander ethnicities, see the Center for American Progress’ article, “Women of Color and the Wage Gap.”

Maternal wall bias, or the “motherhood penalty,” is a form of discrimination where mothers and pregnant women are viewed as less committed to and less competent in their jobs due to raising children.

A controlled Cornell University hiring study found that only 47% of mothers were recommended for hire in comparison with 84% of women who didn’t have children. In addition, while women were penalized in the hiring process for being mothers, men were not penalized for—and often benefited from—having children.

Job flexibility, career track fulfillment, and the cost of childcare also contribute to the difficulties of choosing kids over career. For some women, going back to a career is simply not financially feasible. “The cost of childcare was more than my salary,” remarked a new mother in one Northwestern study. 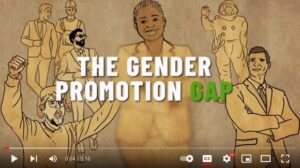 Issues of pay equity and child-rearing only make promotion tracks for women even more difficult. Women are consistently judged as having less leadership potential than men.

“What is commonly talked about in terms of management and potential are characteristics such as assertiveness, execution skills, charisma, leadership, ambition,” Yale Professor Kelly Shue says in the video at right. “These are, I believe, real traits. They’re also highly subjective and stereotypically associated with male leaders. And what we saw in the data is a pretty strong bias against women in assessments of potential (despite receiving higher job performance ratings).”

Women must prove their competence over and over, while men get the benefit of the doubt. This “Prove-It-Again” mentality is compounded with the intersectionality of race and gender.

“Women of color differ from group to group in their (work) experience,” states Joan C. Williams, co-author of the book What Works for Women at Work. “Latinos often have a problem of being too feminine and need to tone it down. Black women seem to have greater “Prove-It-Again” problems; even if they are extremely accomplished, they feel they can’t make one single mistake. Asian American women are better off if they’re not seen as women, but as Asian, so many actually work to play that image up.”

Are Women Too Timid When They Job Search? – Forbes

Proof versus potential: Why women must work harder to move up – BBC

“Potential” and the Gender Promotion Gap – Yale School of Management

Not Very Likeable: Here Is How Bias Is Affecting Women Leaders – Forbes

On Equal Pay Day, women are trying to make a dollar out of 83 cents – NPR

Getting a Job: Is There a Motherhood Penalty? – American Journal of Sociology

The Memo: What Women of Color Need To Know To Secure A Seat At The Table
Minda Harts

Playing Big: Practical Wisdom for Women Who Want to Speak Up, Create, and Lead
Tara Mohr

How to be Successful Without Hurting Men’s Feelings
Sarah Cooper

Battle Tactics For Your Sexist Workplace

Being an Ally, Part I: How Men Can Advocate for Women  |  Fairer Cents

Being an Ally, Part II: How White Women Can Advocate for Women of Color  |  Fairer Cents

The Gender at Work Podcast